Eco tourism in Laos and the AKA tribe 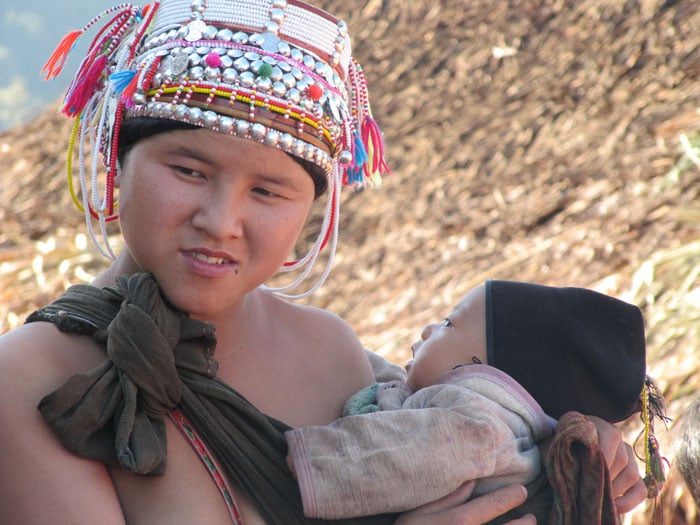 There was one thing in Laos that I really wanted to do more than in the other countries I’ve been to; trekking in the jungle and among the villages of local tribes.
The ideal place to be able to do this activity is Luang Namtha about 7 hours by minibus from Luang Prabang, close to the boundary with China and with Myanmar.

This region of Laos is full of different ethnic groups and tribes that still maintain a strong cultural identity that cannot but fascinate and leave something in the memory and in the heart of those who encounter them.

Laos is clearly a country that is discovering tourism in recent years, the roads are not asphalted, the buses are old and dilapidated, 200 kilometers are covered in 7 long hours and the further you go out from the normal tourist destinations the more complicated it becomes to travel.
Yet maybe it is thanks to these “inconveniences” that Laos is perhaps the only country in Southeast Asia that offers trekking tours under the banner of eco-tourism and especially in respect of the ethnics. 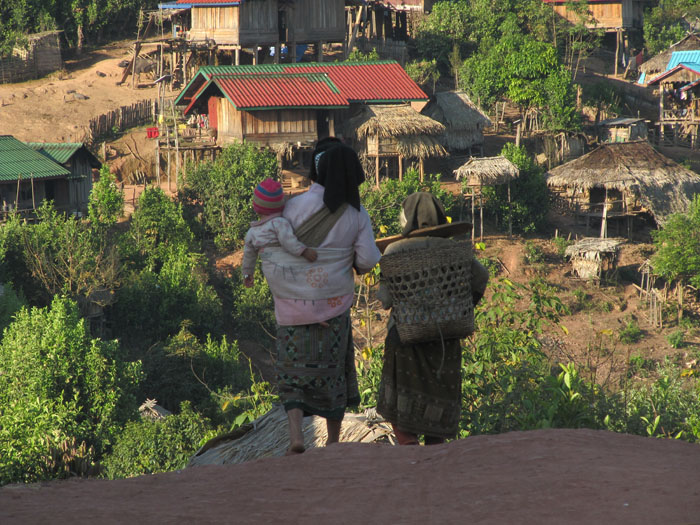 I must say that I did trekking too in northern Thailand and I’ve noticed a big organizational difference between the two countries .

In Thailand, where the number of tourists is significantly greater than that of Laos, the tours are made in the dimension of the tourist and not vice versa, on one hand it may happen that the populations of the villages you pass through have little of original or even worse, on the other hand, as in the case of the long neck women who become objects of a real human zoo where these people are literally prisoners.

Laos instead has recently discovered tourism and the travel agencies that sell days of trekking, try to impact minimally on the culture and the traditions of tribes in which time seems to have never passed.

In Luang Namtha trekking is basically the only business thanks to its favorable location in an area where interesting and different cultures meet among themselves.
Thence the agencies that deal with eco-tourism and responsible tourism are numerous, it took me 4 hours to decide which one to turn to.

All the agencies organize tours for groups up to a maximum of 8 people and the options and choices are numerous and customizable, in case there isn’t a group already formed, obviously, the prices are more or less the same.
One of the most popular, and economic tours, is the jungle trekking which includes canoeing and rafting, but, having already done these activities a few months ago, I was looking for something different and unique.
I wanted to see the Akha tribe and spend a few hours or a few days in the villages in the middle of the jungle.
The cost of this tour was among the highest, in this case the option chosen by us, me and Miguel, my travel companion during those days, costed 800,000 kip per person which we managed, afterwards, to make get down to 650000kip.

The expense though was worth it because what I saw and of which I participated, had something that was unique and as usual I also had one of my usual strokes of luck.
We left at 8:30 in the morning. The day was cold and foggy.

After 30 minutes by tuk-tuk we were left by the roadside in front of a huge green expanse. We were at the gates of the jungle.
Following the river and helped by a stick so as not to fall into the water and not to precipitate from the marked trails only by the lack of grass, at the beginning, the walk seemed a children’s game.
But never stop at the first impression.
After about 1 hour of walking, things started to get complicated: mountain climbs on the verge of a river and 30 meters high, no handholds if not the stick that served as a third leg, me clinging to the trunks of all the trees, an ugly version Tarzan, and a day that from cold had become hot and acquitted.
The pristine and verdant nature has been the background for a walk lasting 5 hours in total.

Needless to say, for a poor sporty girl like me, it was, at times like believing to live the last moments of life, my heart was beating like crazy and my legs were by now going ahead by inertia, I could not utter a word.
After the first 2 hours of walking and after a lunch with sticky rice, pumpkin, boiled broccoli and a spicy tomato sauce served on a tablecloth made of banana leaves, with my stomach full, I asked Sing, our guide, how much more to reach the village.
With a calm and placid voice he replied that there were 3 more hours to go. 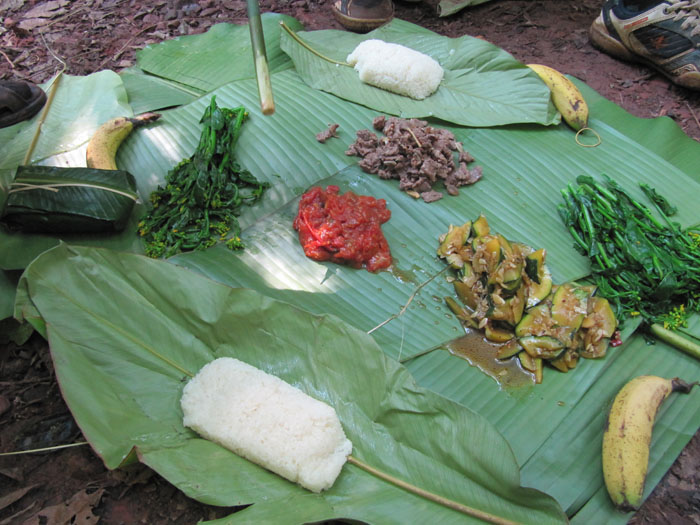 Lunch in the jungle

In three hours we passed through woods , rivers , country-sides , without meeting anyone. It was hot.

Backpack on shoulder and peering around terrified of meeting or tripping on an anaconda mistaking it for a log, or even worse grabbing on to it so as not to precipitate 30 meters down the mountain.
After crossing kilometers of jungle we finally arrive at the Akha village. It was 3 in the afternoon and very hot and there weren’t people around. 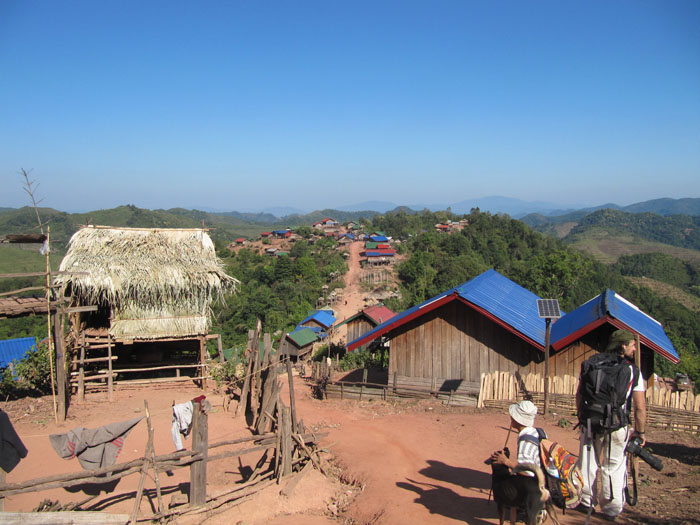 In the villages the working day begins at 6 in the morning and ends at 17, I would have discovered this only later, so at that time the only voices that could be heard and the only people that were seen were children aged 2 to 8 years playing with bicycle tires or wheelbarrows made of wood.

The village seemed deserted, I go for walks, the locals look at me like I’m a monster, they seem not to trust me, to run away if I get too close, most of them at my request to take a picture refuse, only a few accept.
In the late afternoon, however, what was a ghost town starts to come alive. Serious women with huge baskets on their backs full of fruits, wood or leaves return home, some are already washing at the fountain and with their small children.
Men begin to populate the main street, the children continue playing and screaming.
Despite being there for some time, their distrust of me does not change.

I feel inappropriate, an alien, I put down the camera and sit on a tree trunk resting on the ground.
I decided that even if I cannot take pictures, I could nevertheless, watch in silence what happens around me and show the locals that I was not there to treat them as freaks, but only to attend as an outside spectator to a life that is not mine and that I would like to know more of.
The opportunity is given to me on a silver platter.

As darkness falls in the evening, music could be heard from our bamboo house, I ask Sing what was happening and he explains that that same evening a wedding would be held and that the chief of the tribe, and the couple had agreed for us to join in.
The only condition: not to take pictures of the spouses or of the happenings in their home.
The wedding was fun and particular and I talk about it in the post Akha Wedding – The jungle, the rice, the opium. 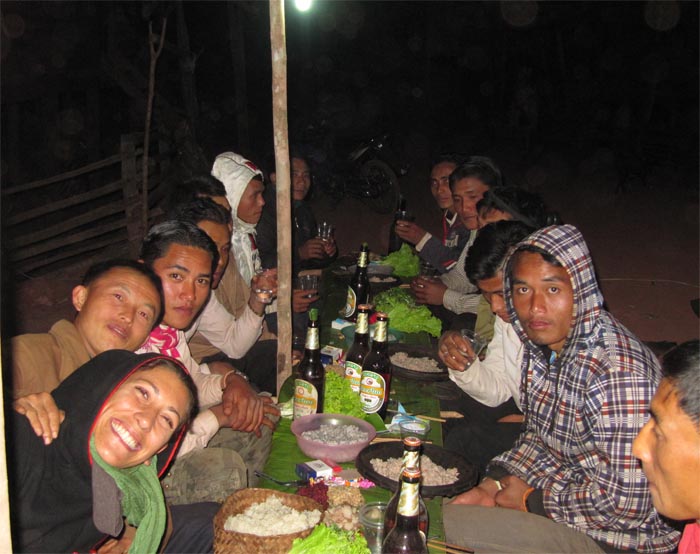 The village is located on top of a mountain in the midst of the jungle, the people there is wary of the tourist, or rather the women are very suspicious and do not want to be photographed (and what a shame!), the men and the children show greater curiosity towards foreigners but they always look with an inquiring eye anyway and do not want to be approached.
It’s important to remember that to take pictures you must always ask permission, not everybody enjoy it and some believe that it is the stealing of their soul, it reminds me of some Mexican populations, but if they agree, always show them the photo taken, makes them happy and proud, especially the children.

Trekking in Laos is an experience I recommend all those who want to understand and discover cultures and traditions that will probably disappear not too many years from now, to do, cultures in which man dominates over the woman even though it is she who wears the breeches, who works hard in the fields and who takes care of the many children.
Sit by the side of the road and let the scenes of life of another era, or rather, of another world, in the true sense of the word, flow by.

The agency to which I have put my trust in for these two days of trekking is the Ethnic Travel Eco – Guide Service, the office is located on the main road.

The owner is from Laos, but most of all, he is patient and if you lose a some time with him, will also give good discounts on the activity you want to do .
The prices are negotiable especially for this particular trekking which is one of the most expensive and usually does not have many participants.

We were in two and we paid 650,000 rip or $ 80, it might sound expensive, it’s true but absolutely money well spent, especially with the benefit of hindsight, and thinking back to the beauty of the places and of the culture that I was lucky enough to discover, even if briefly.
My advice is to do trekking in Laos because away from the mass tourism circuits, it allows you to delve into cultures that would otherwise be difficult to discover.

What to do in Nicaragua - A suggested two weeks travel itinerary 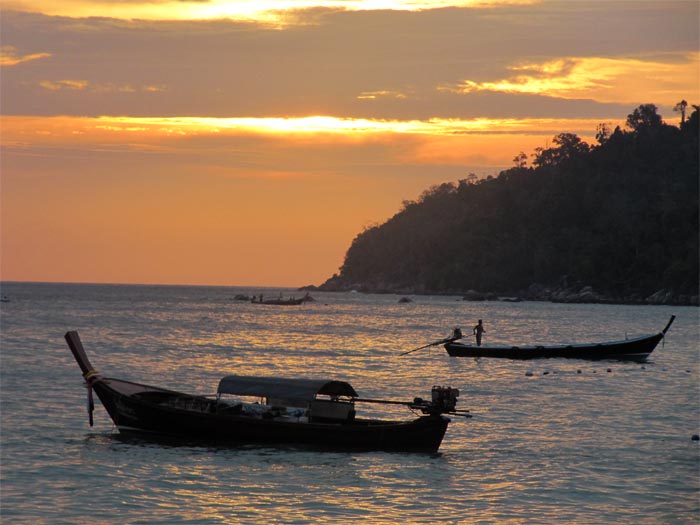 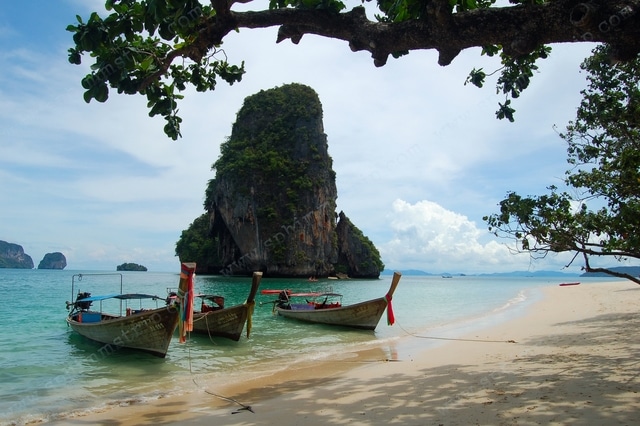 Railay beach (Thailand) – A location and many wonders 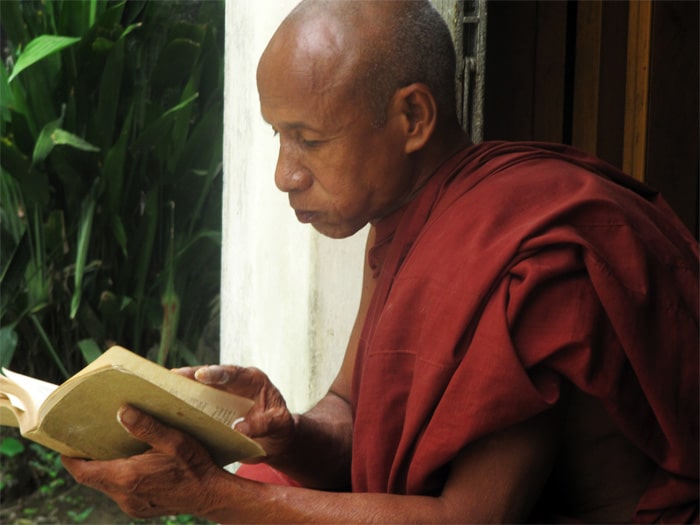 A JOURNEY TO MYANMAR – PHOTO-ESSAY