China or PRC, is located in eastern Asia, on the western shores of the Pacific.

The Chinese territory extends east from the confluence of the Heilongjiang River and that of the Wusuli, to the west from the plateau of Pamil at a distance of about 5200 km and 4 hours difference in time zone, north of the stretch of Heilongjiang River near Mohe, to the south of Zhenmuansha coral island on the southern Sea at a distance of about 5000 km.

China has a land area of 9 million 600 thousand square kilometers, equivalent to one-fifth of the world total and the total of Europe and is the third country in the world for vastness soon after Russia and Canada.
With a coastline of 18,000 kilometers, China faces the Pacific Ocean on the east and looks towards South Korea, Japan, the Philippines, Brunei, Malaysia and Indonesia. 2800 km of continental borders separate China from North Korea to the east, to the south by Vietnam, Laos and Myanar, south-west and west by India, Bhutan, Sikkim, Nepal, Pakistan and Afghanistan, and to the north from Mongolia.

China’s topography is presented as a staircase at three levels going from west to east.

The of Chinese southwest plateau of Qinghia-Tibet is the country’s highest staircase, seeing that because of its height of 4500mt, it is also called “the roof of the world.” The second level staircase, whose height above sea level is between 1000m to 2000m, stands in the highlands of Inner Mongolia, Loess and the provinces of Yunnan and Guizhou and in the Chaidamu basins, Zhunger and of the Sichuan provinces. 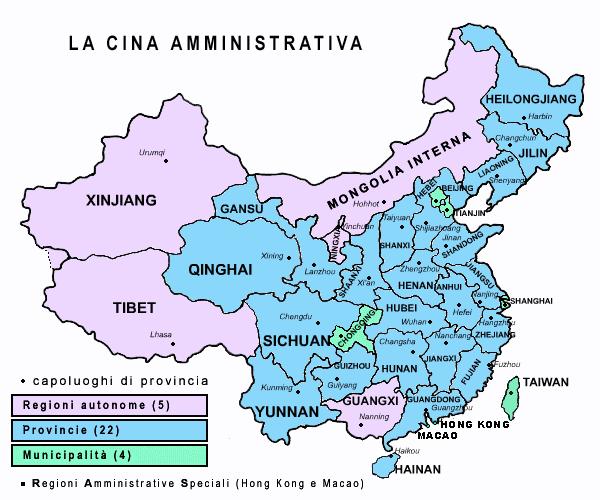 The third level staircase, the lowest, extends into areas that include areas east of the mountain ranges of Daxinanling and Taihang, the plains of northeastern China and along the middle-lower reaches of the Yangtze River, the hilly areas of southern China and of the south-east coasts and their continental shelves. In China, land configurations are very complex and varied, thus presenting a panorama that varies.

The national surface is then divided respectively in: 33% mountains, 10% hills, 26% of highlands and 19% of the basin.

Depending on the height above sea level, the Chinese territory is divided into: areas with height less than 500 m occupy 25%, those with heights between 500m and 1000m and between 2000m and 3000mt respectively 7% and 25%, while those with more than 3000 m height occupy 26%.
After the founding of new China, the administrative division of the country has suffered a change several times.

Currently, China is divided into 23 provinces/regions, 4 municipalities directly under the central government, 5 autonomous regions and the 2 special administrative regions of Hong Kong and Macao. Of the 23 provinces, Taiwan and Hainan are islands, respectively, placed in the eastern and southern territorial waters. They are the two major islands of China, with an area of over 30,000 sq km each.

China is a country with a large extensive land mass with abundant natural resources. All the provinces and regions are different for: the population, land configuration, climate, economy, culture and places of historic interest. 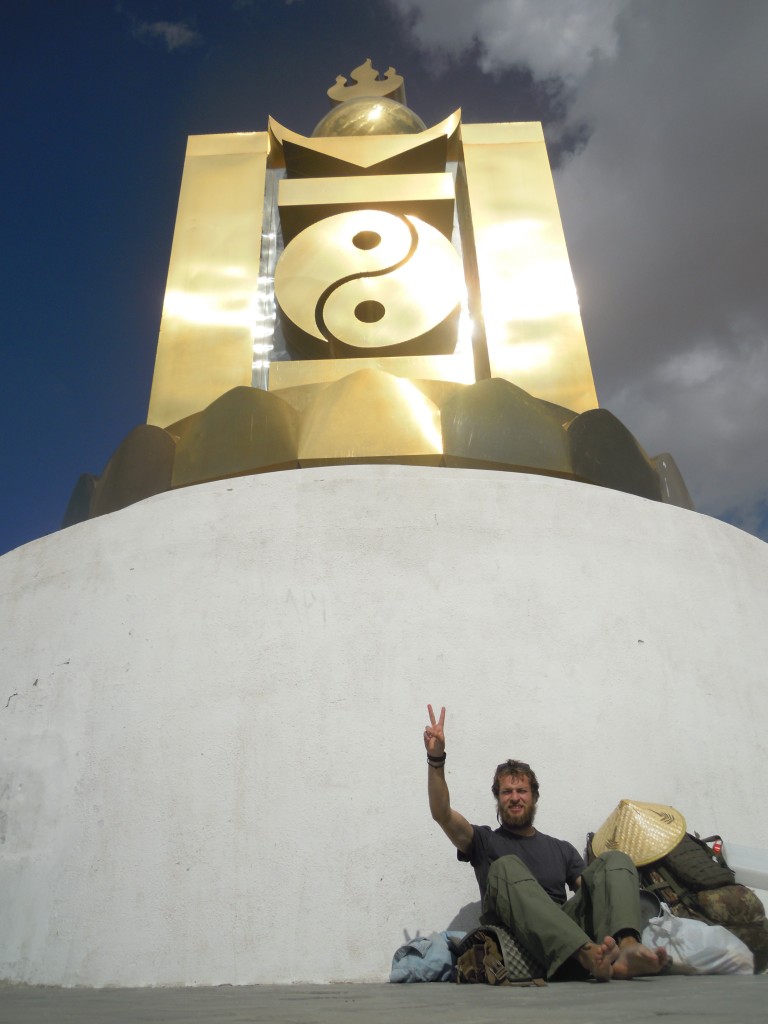 How to get to Cina

Entering China is not particularly difficult, however, I recommend you to solve the burocratic matters regarding the visa in your home country. The option of a multi -entry visa or that of a double-entry visa is the most tempting that will allow you to visit cities like Macau and Hong Kong, although figuring in China are states in their own rights.
For more information on Chinese visa click here.

The main airports are those in Bejing, Shanghai and Hong Kong.

China shares its borders with countries like Afghanistan, Bhutan, Mongolia, Laos, India, Vietnam, Nepal, North Korea, Tajikistan, Myanmar, Russia, Pakistan, Kyrgyzstan and Kazakhstan.
So getting in by land is just as simple, although the borders with Afghanistan, India and Bhutan are closed. 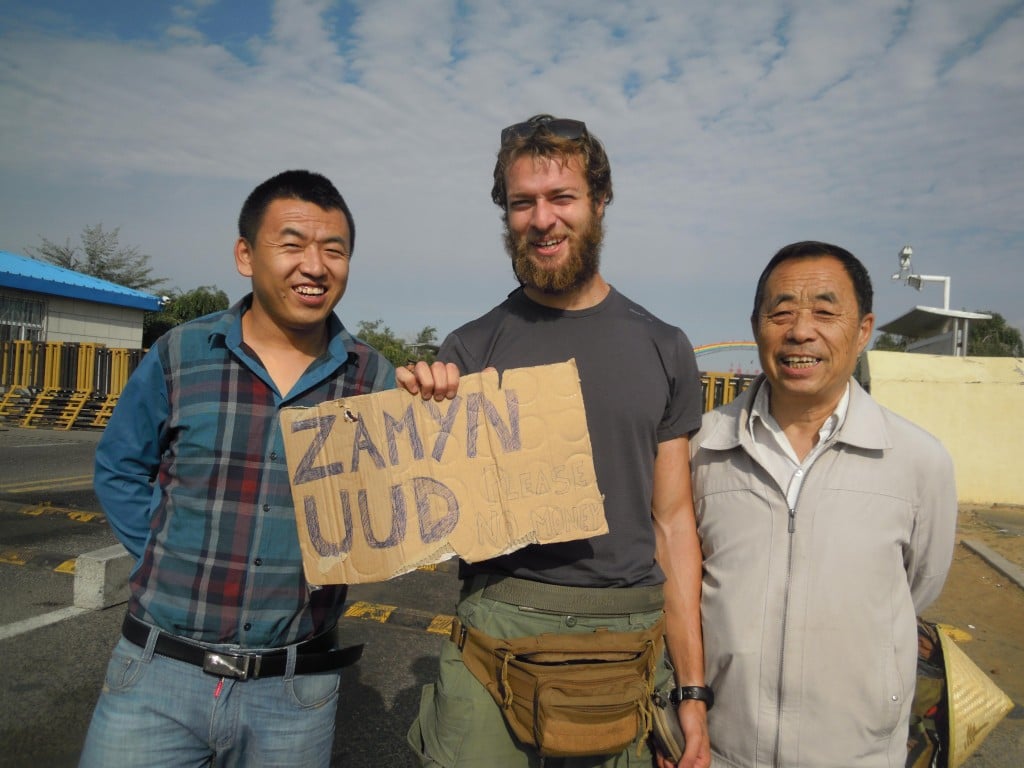 How to Travel in China

Given the vastness of the nation, this results as very well connected by both points of view, be it air or land.
For those who have little time and a good economic availability, I strongly recommend to buy well in advance the air tickets to the cities he would like to visit.
Given that not all the cities are accessible by plane, in these cases the best means of transport is the train. There are many classes or better, they are divided according to cruising speed.

For my trip I have always preferred the night trains, which have resulted in a considerable advantage from both an economic and time period point of view.
Travel by train on a seat for 12 hours is not very comfortable but the backpacker traveling is also this. I have even undergone an entire day’s travel on the train but this, guys, is another story. I can only tell you that traveling sitting down for 24 hours is not exciting.

I always recommend to buy train tickets in advance even when you arrive in China with a well-designated route. Otherwise you could find that there are no places at all available, no hard bunks or seats, and you’ll have to settle for the floor of the train, or if you prefer, to stand. In my opinion an experience to make. To plan your travel route by train click here for the official website of the railways in China.

And finally, where it can’t be reached by the train, you can always arrive by buses or collective taxis. Both solutions are not bad and for more or less equivalent price. In my opinion the train is the best solution to travel in China, and for those of us looking for savings on transport. The prices are not excessive for normal trains, of course if you like to experience the thrill of train speeds you’ll have to shell out several RMB ( Chinese currency ).

What to visit in China? Good question!!!!
When we think of China we immediately imagine the Great Wall of China, the Forbidden City, Terracotta warriors, Shanghai, Hong Kong, Macau and everything that revolves around the normal tourist routes. Well I can tell you that it offers much more. To begin with Bejing, for example, it is able to offer a lot more than what you think.

Museums like the Capital Museum and temples like the Zhihua Temple were practically besieged by Chinese tourists only and no foreigners. And to think that they offer works of art of inestimable value and beauty! 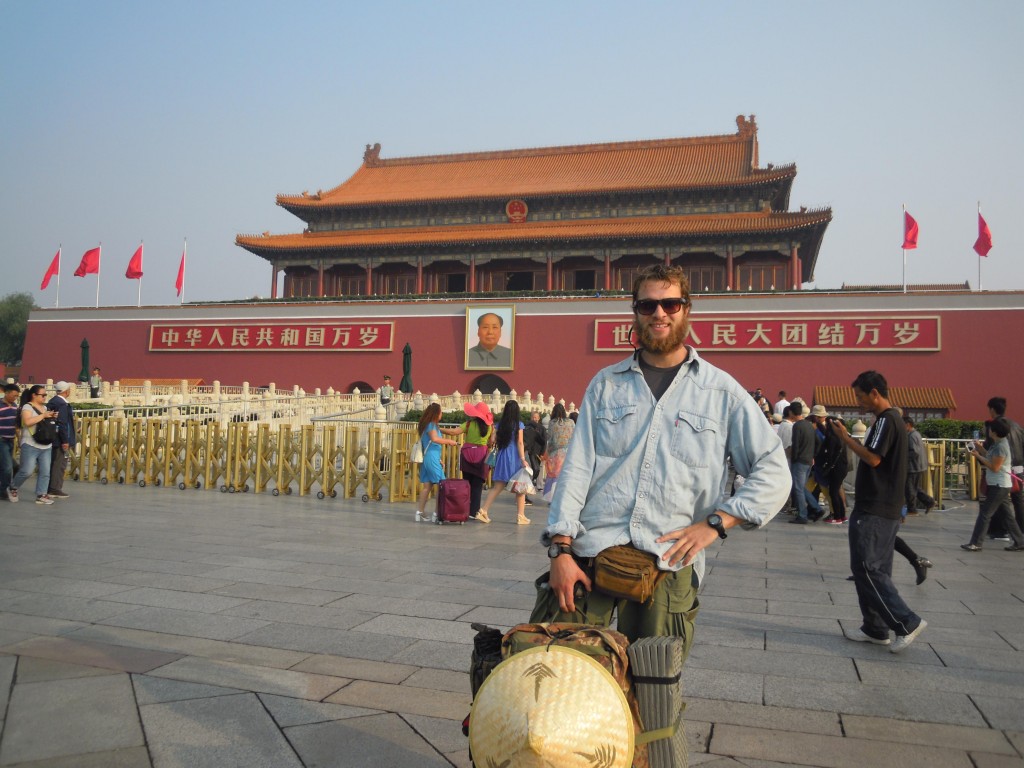 We can then talk of the Great Wall in areas such as Jiankou or Zhuangdaokou that present wilderness in its pure state, and certainly far from the national and international tourist swarms like, for example, the Badaling section of the wall. 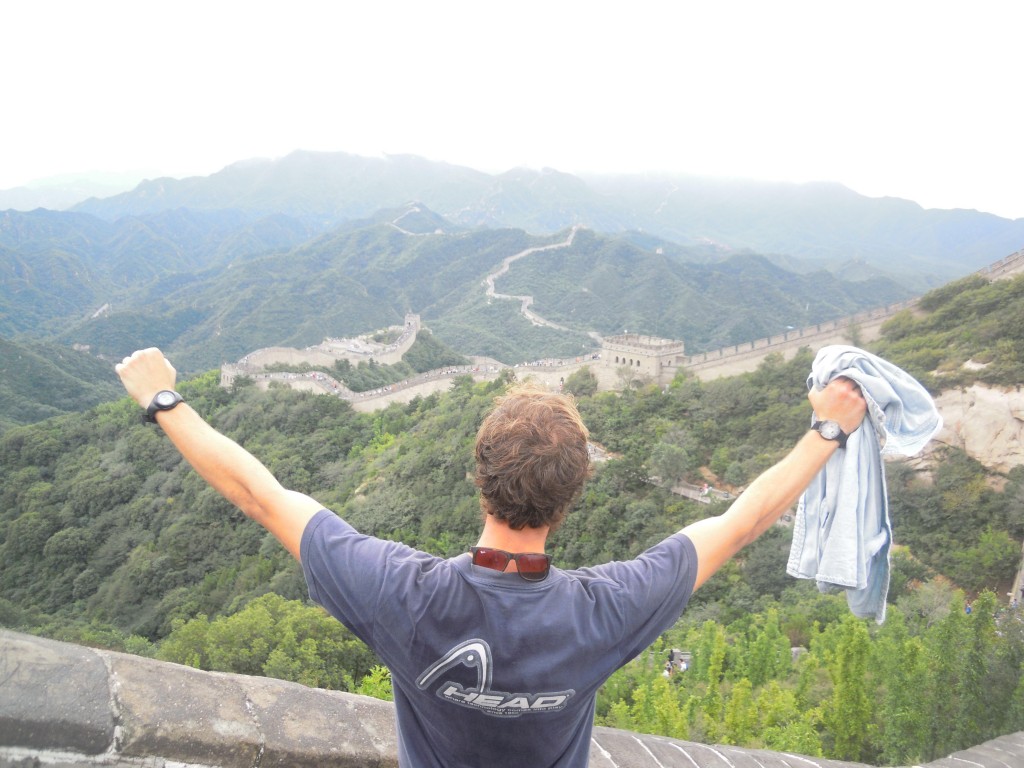 Outside Bejing each region can offer you something that is special and adventurous at the same time.

In the Shandong region precisely in Tai an, small, lively village of this beautiful region stands a splendid summit of 1545 meters, the Taishan. Visited each year by millions of pilgrims who follow Taoism, the overall denomination of a philosophical and mystical doctrine formulated by Chinese thinkers in the centuries IV and III BC and inspired by an individualistic and egoistic conception whose aim is the preservation of life and health and peace of the person, to be implemented through various practices (alchemical, dietary, respiratory, gymnastics, sexual, etc.

Climbing this summit was fantastic and watching the sunrise from the peaks was even much more so. Few were foreigners I met, I believe at the most 3, but the thing I valued most was the fact that all the Chinese appreciated the gesture made by me.

Moving towards South you will find Shanghai that absolutely is worth a visit. City full of life, avant-garde, rich in art and novelties. Above all, pivot of the great Chinese economy given the presence of the financial district. 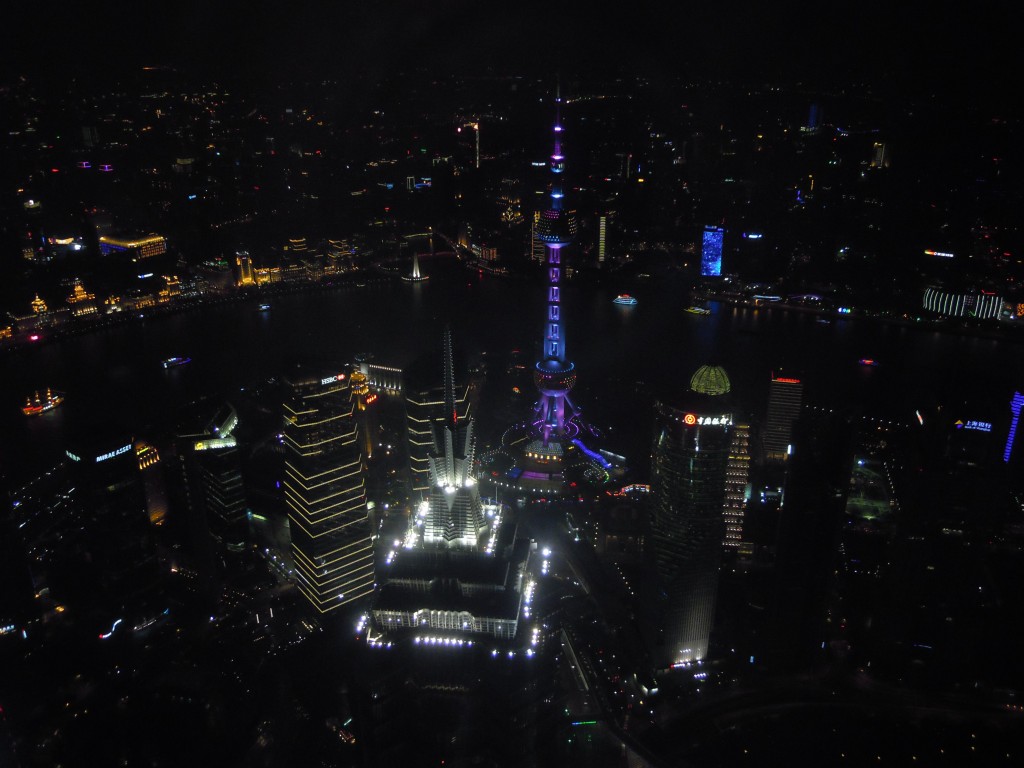 An attraction that is well worth a visit is instead the West Lake of Hangzhou, in Zhejiang region, about one hour by train from Shanghai. These offer a spectacular scenery of the countryside and its banks, hiding, I’m sure something magical.

The entire Chinese coast is worthy of a visit, but Hong Kong and Macau must be seen, even if they are a bit expensive from the economic point of view. Moving inwards we find regions such as that of Hunan.

This offers the possibility of organizing a diverse range of trekking but certainly the National Park Zhangjiaje , offers unique landscapes, with its spectacular rocky peaks that, in the past, have since inspired James Cameron for the movie Avatar. 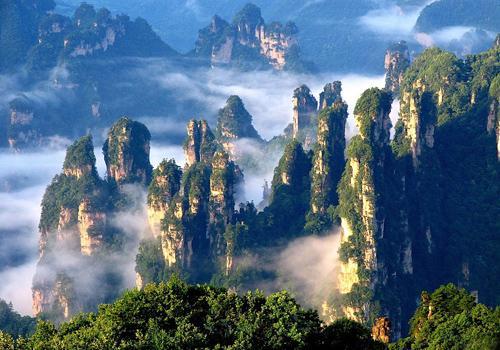 Explore the villages of Jinkeng, Dazhai, Ping’an and Hong Hair. Breathtaking landscapes and people of other times will be on the agenda. The trek between Ping’an and Dazhai was not difficult, but if you do not have a good sense of direction to entrust yourself to a local guide will be the best thing to do since it is also very low-cost ($ 10/15 for a trekking for 4 to 5 hours in the countryside). 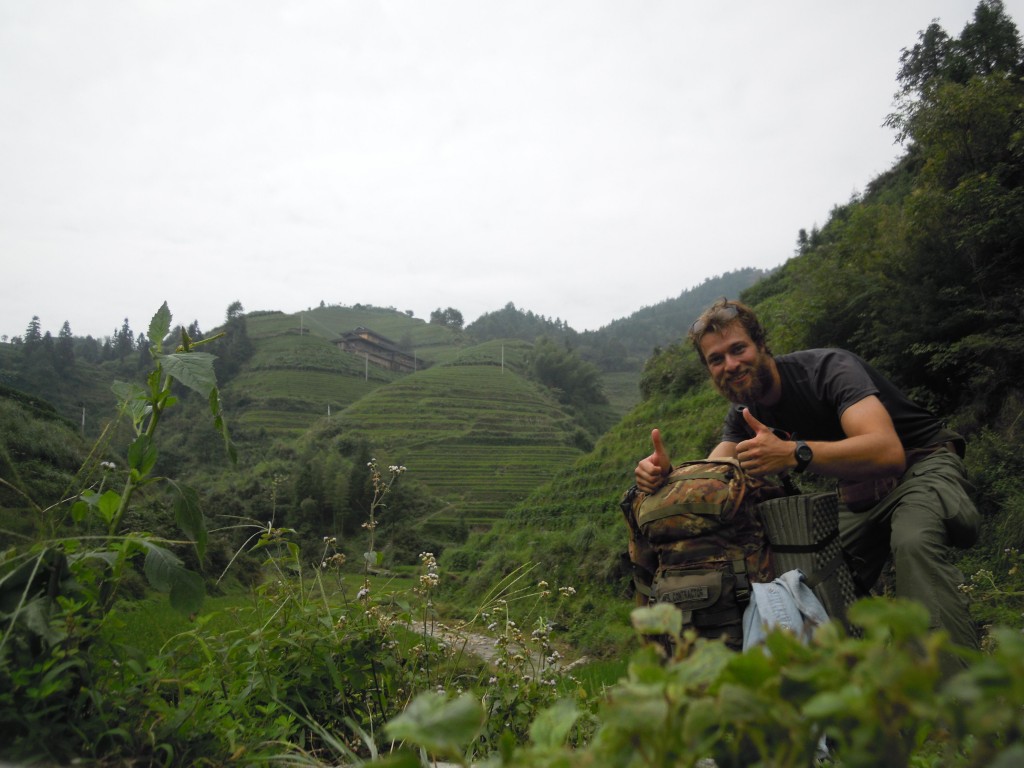 A similar situation if you want something primitive and even less touristy, you can find in the region of Yunnan precisely in Yuanyang, about fifty kilometers from the border with Vietnam. Increasingly inwards we find the region of Chongqing, where the homonymous town, offers, in my opinion, one of the most beautiful sights of Central China. Organizing a cruise along the Yangzi river was a wonderful thing and although the weather was not the best, it offered and offers breathtaking views, particularly at the Three Gorges. 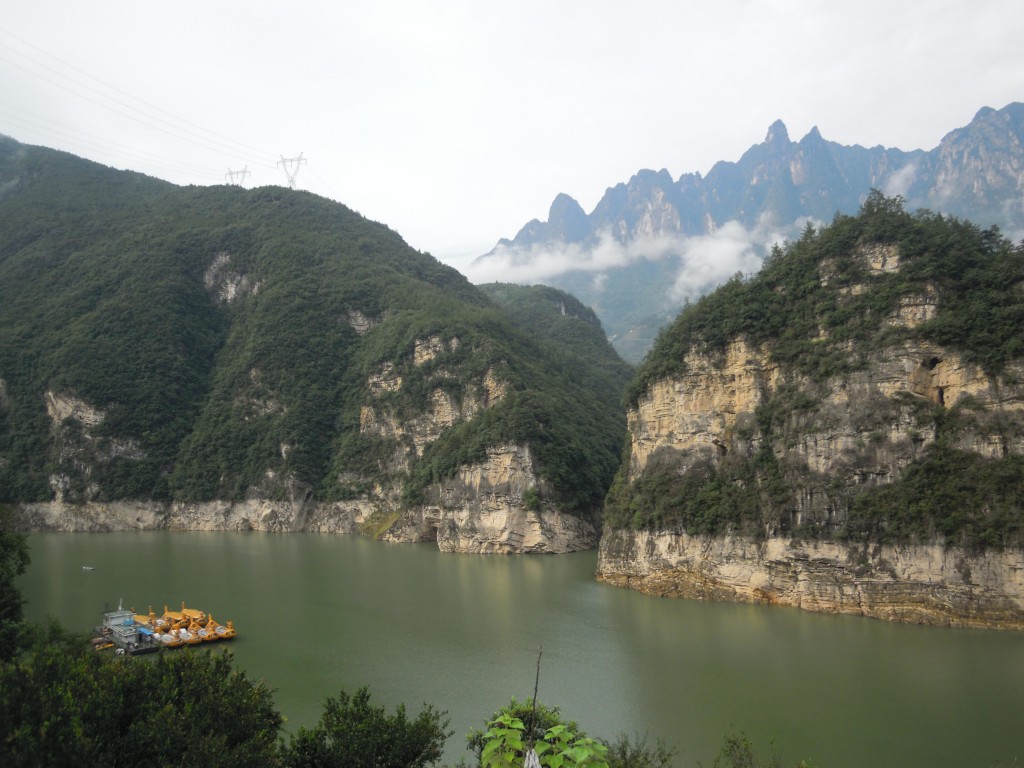 Two other interesting attractions are, Pingyao (in the Shanxi region) that describes in full how an old Chinese village was structured in the past. Its streets and its walls tell a lot more than you might imagine. The Muslim Quarter of Xian that, even if a bit touristy absolutely deserves a visit. In Xian we must not forget the Terracotta Warriors that can be described with just one word … .Stupendous. 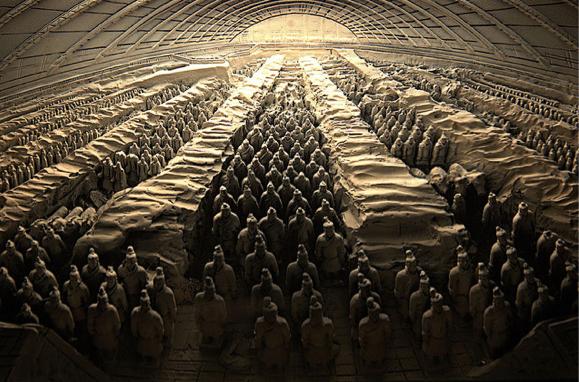 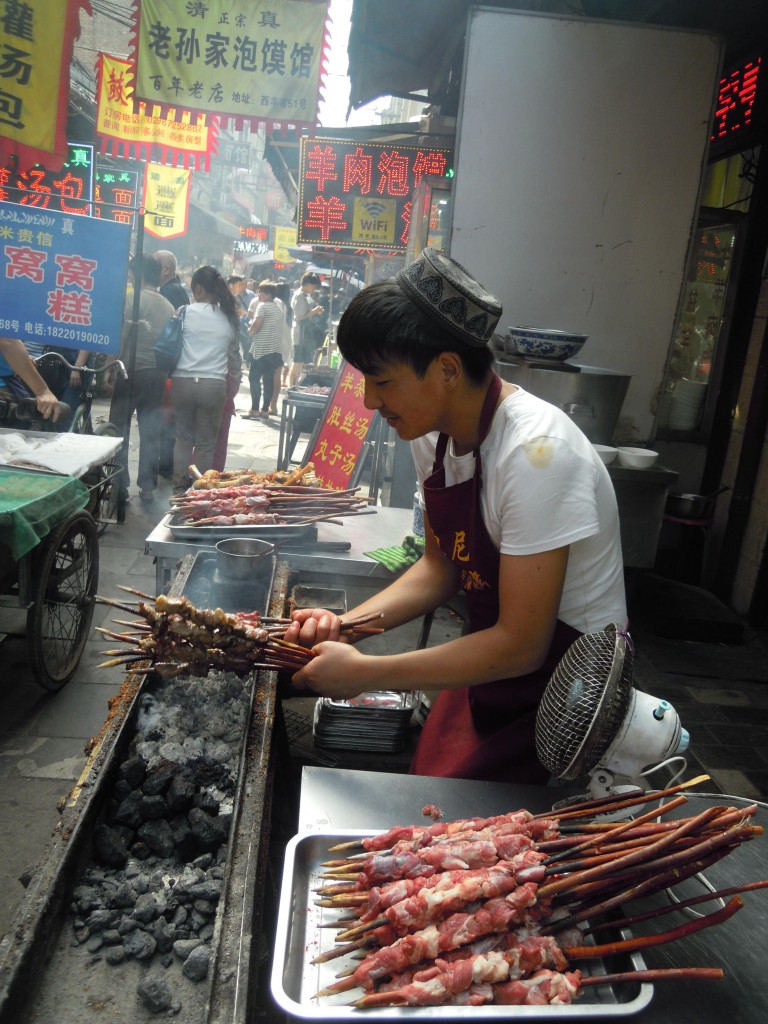 Where to stay in China

The least of your problems in China is certainly the accommodation. Any village or town can offer accommodation to suit all budgets. Obviously a tent in tow can come in useful in some situations. A great site specialized in hostels is with no doubts Hostelworld, which is the one I use since always providing me the best prices and lot of options with dorm beds starting from 10$.

How to organize by yourself a trip to China

Arm yourself with adventure spirit and roll up your sleeves. Organize everything yourself is not an impossible mission, but it certainly is not for everyone.
The only recommendation I can give you is to never trust prices too inferior to those of the competition. Behind a low price can always be hidden a “rip-off” and if you’re looking to buy travel packages from Chinese agencies make sure of what the conditions of the offer are.