Travel itinerary in Maremma, small region in the south of Tuscany that offers everything you desire from mountain routes, to hills and wine angastronomic itineraries down until the coast. This travel itinerary wants to cover the whole territory that stretches from mountains, hills and coast, a trip to the Tuscan Maremma for 7 days to discover the territory and its culture in the company of an excellent guide, my friend Cristiano of JustInToscana, expert connoisseur and one who loves the area.

Starting from the mountain with a visit to Santa Fiora, a place that is even mentioned by Dante in the fifth canto of the Purgatorio of the Divine Comedy. Santa Fiora is a delightful village on the slopes of Mount Amiata, where it’s easy to be amazed by the treasure that encompasses the Romanesque church of Saints Flora and Lucilla, an extraordinary collection of majolica bas-reliefs by Andrea della Robbia, nowhere else can be found so many, and of this only few people know.

It is from here you can reach the summit of Mount Amiata, where the view cannot disappoint and in which the natural aspect must not be underestimated, Mount Amiata is, in fact covered with forests of chestnut and beech, not surprisingly, the mountain is called the green lung of Tuscan Maremma.

The climatic and geographical situation of Monte Amaita is excellent also for the chestnuts so much so that you can still admire the numerous squeegees evidence of the past practice of drying the chestnuts. The mountain is characterized by a natural reserve system with special characteristics, it is a large open-air museum, an environmental park in which art, culture and nature come together happily.

Right in the City of Arcidosso, another charming mountain village and absolutely not to be missed, a wildlife park has been created that has been inspired by the German Wild Park that hosts species of animals threatened by extinction or by genetic erosion, here the rare Apennine wolves can be seen, the sorcino crociato, the Egyptian vulture, the wild boar and the ungulates such as deer, chamois, roe deer and mouflon. 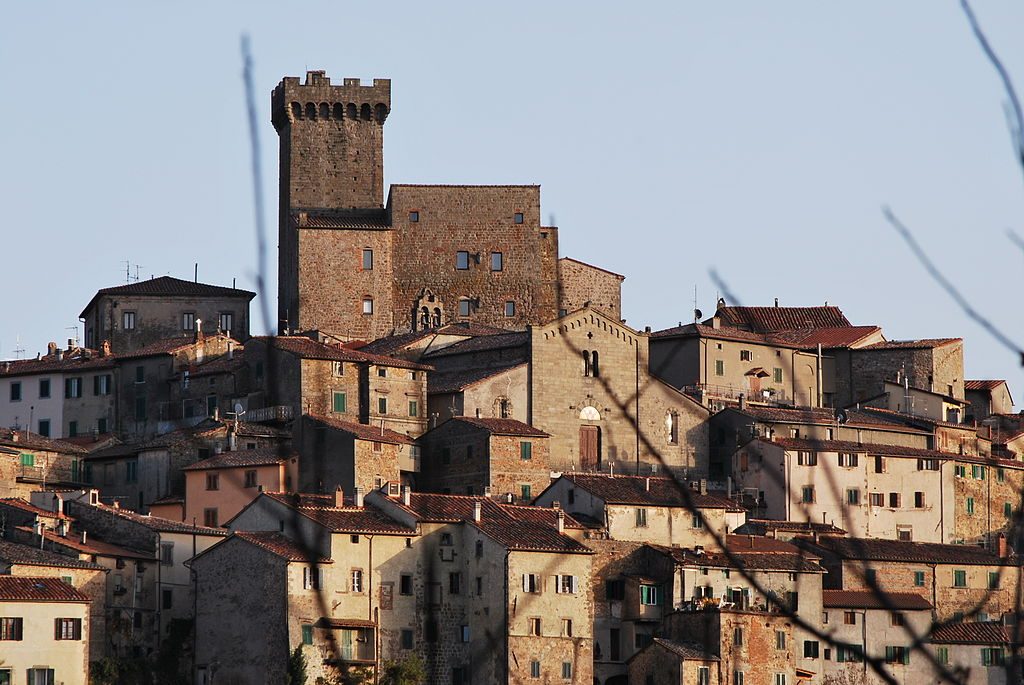 Continuing an obligatory visit are the cities of tuff, Pitigliano, Sorano and Sovana, a must if you want to taste the delicious typical dishes, drink good wine and visit unique and different from each other monuments, such as the Etruscan cave streets and necropolis, surrounded by greenery, ideal for those who enjoy walking and venturing into nature, fortresses and Renaissance palaces that house pleasant museums, Romanesque and baroque churches.

Not to be missed is a visit to Pitigliano that boasts an entire Jewish quarter that has earned worldwide the nickname ” Little Jerusalem of Italy” for having given refuge, over the centuries, to the Jewish community.

Inside the old town still retains the old structures of the Jewish quarters, the Ghetto and the sixteenth -century synagogue. The visit route is home to not only the local ancient craft shops, but it shows some rooms used for traditional purposes: a place carved out of the rock was adapted to the creation of the ancient bath, in Hebrew mikveh, one of the typical cellars of Pitigliano, where the old system for the conservation of kosher wine is still intact.

Continuing on the route we arrive at the furnace room, composed by two spaces one for the processing of the dough, used for the preparation of unleavened bread and of sweets and the other for the cooking.

If you are tired and need rest and relaxation the ideal is to rely on one of the many spa facilities and free maremmani thermal spots for completely relaxing moments in one of the Italian areas where what is not missing are exactly the thermal waters with regenerating and relaxing properties, the choice is vast but what perhaps makes them even more attractive is the perfect combination between nature and man-made structures, the oasis of peace in the natural pools of warm water.

Continuing on the discovery of Maremma, a visit that I recommend is the wonderful gem that is called Montemerano, a small village with a church dedicated to St. George, the patron saint, which, seen from the outside seems like nothing special, but inside it has a myriad of important works of art including the Madonna della Gattaiola.

At this point, it is time to reach the sea, the coast is an exuberant spectacle of colors, a paradise to live at ease, visiting every cove, Porto Santo Stefano and Porto Ercole with their Spanish rocks, the legacy of that domination which identified on the silver coast its point of strength to control routes towards the north and the south.

A walk in Orbetello cannot be missed, the smell of the lagoon will make you understand immediately that we are in a place where the art of preserving fish is really in the traditions, at this point look for a good restaurant and at least taste the famous Orbetello bottarga, a real uniqueness and certainly a delicacy for your palate!

And finally, awaiting for you, the seven jewels of the archipelago, the islands that according to legend, were born from the pearls of Venus’s necklace falling into the sea. My advice is to visit at least one, Giglio Island, for example, with its colorful harbor, the beautiful beaches in Campese and the delightful old town perched on the summit in Giglio Castello! Let them tell you the legends linked to the Saracen raids and how the people of Giglio defended themselves: the inhabitants are very proud of their attachment “to the rock”.

Here you are..seven days of holiday in Maremma have flown and certainly were not enough to see everything, I guess we neede another week and so … in the next post!