Omo Valley – The Hamar tribe, the Bull Jumping and the Evangadi 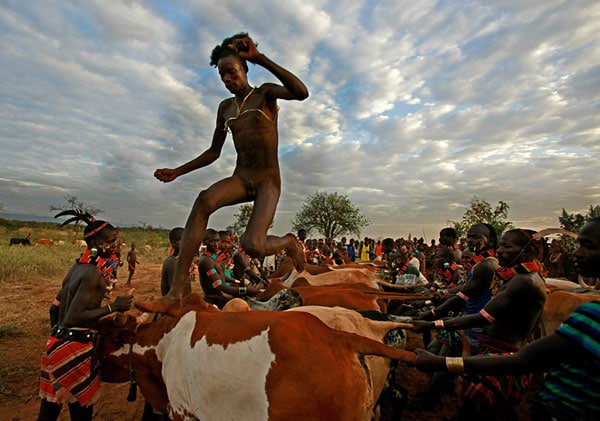 The Hamar, I recognized them as soon as I saw them. I had read so much and even though I had not seen any pictures before, I just needed a look at the hairstyle of the women to understand that I had finally reached the tribe of which I already knew enough (for an enjoyable novel that talks about the Hamar, I highly recommend the book Land of the Yellow Bull, available only in English, difficult to find online, but in Addis at the Mercato you can ask your guide to find you a second-hand copy).

The Hamar live on sheep-raising and agriculture, they are sedentary and are distinguished from other African tribes not only for the way they dress colorfully and embellished with colorful beads and shells glued to the edges of dresses made of goatskin, but also for two very important events enshrining fundamental moments in the life of every man for the social life of its inhabitants.
These two events, which take place one after the other, are illustrative of a culture rooted in the traditions and tell a lot of the tribal way of thinking.
These are the Bull Jumping (the jumping of the bull) and the Evangadi (night dancing).
I had the pleasure of attending both with a guide (friend) of excellence, the young Kala, who, as Hamar escaped from the village to go to study (this is a beautiful story which I will explain in the post travel Ethics among the African tribes and because they are, in my opinion, destined to die soon), had given me a vision of the tribe absolutely unique and of inestimable value, allowing me to live in the same tribe (he made peace with the family!) leaving me to get inside the huts.

The great love that the Ethiopian tribes have for their animals is illustrative of how life, understood as subsistence, revolves around the herd.
For the Dasanech, who are nomads from Omorate downwards, the animals are to be accumulated, not to be killed if not for special occasions (urgent need of money, famine etc), because it is the only patrimony, as well as the yardstick for defining the wealth of a family.

The animals are the merchandise to exchange for combining weddings and then get married effectively (the tribal men marry several times money, and thus herd, permitting). In the tribes it is the man who pays the dowry to the woman’s family.

The Hamar are a sedentary tribe in the Turmi area, they do not live in the typical huts of the nomads, rounded and of corrugated iron or patches that cover structures made of wood, but rather in wooden circular buildings with relative sloping roofs.
They works every day except Monday which is market day in Turmi, and generally at 7 am the village empties, men and women work without any particular distinction between the sexes, both work in the fields and with the live-stock. 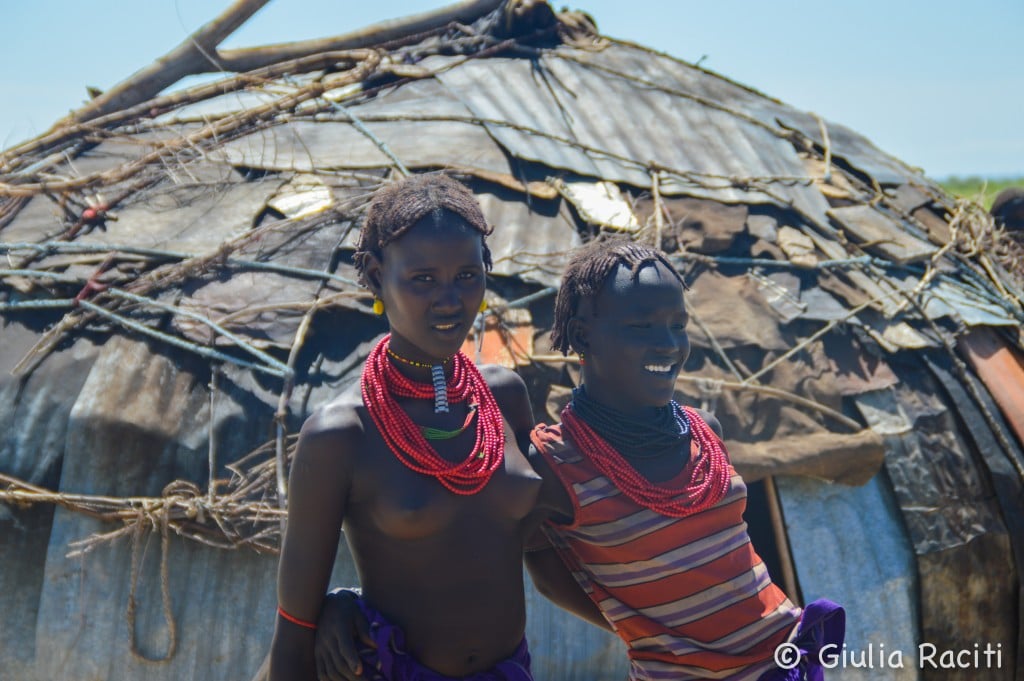 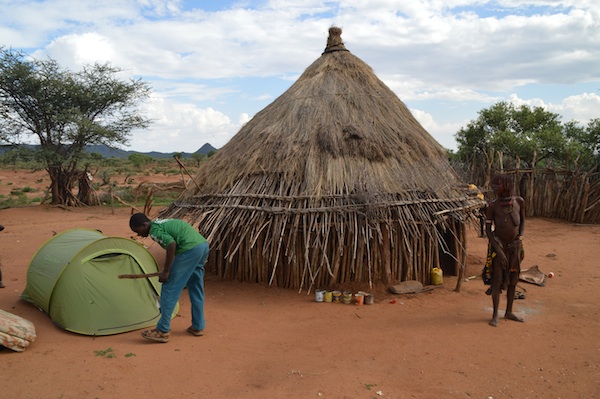 Camping in the village

The most important moment in a man’s life, or rather for the male member of the tribe, coincides with the passage from youth to adulthood, passage that requires a very picturesque celebration, evocative and even controversial, and a physical test that literally, lays bare the alertness, the strength and the virility of the young boy.

This step takes place during the jumping of the bull (bull jumping), the celebration that is distinguished in two stages: the whip-lashes by the “new men”, i.e. those who have jumped the bull recentlt, to the women of the family of the boy who will have to jump the bulls who, to show their love for him, will let themselves be whipped until they bleed.
And the second part, i.e. the jumping of the bulls.

The boy, completely naked, will have to jump and run on the back of 8 bulls and only when this is done three times, without falling, he can retire in the bushes with his friends, following the Evangadi (night dance), until the family will announce who will be the future wife (the first wife is chosen by the family). 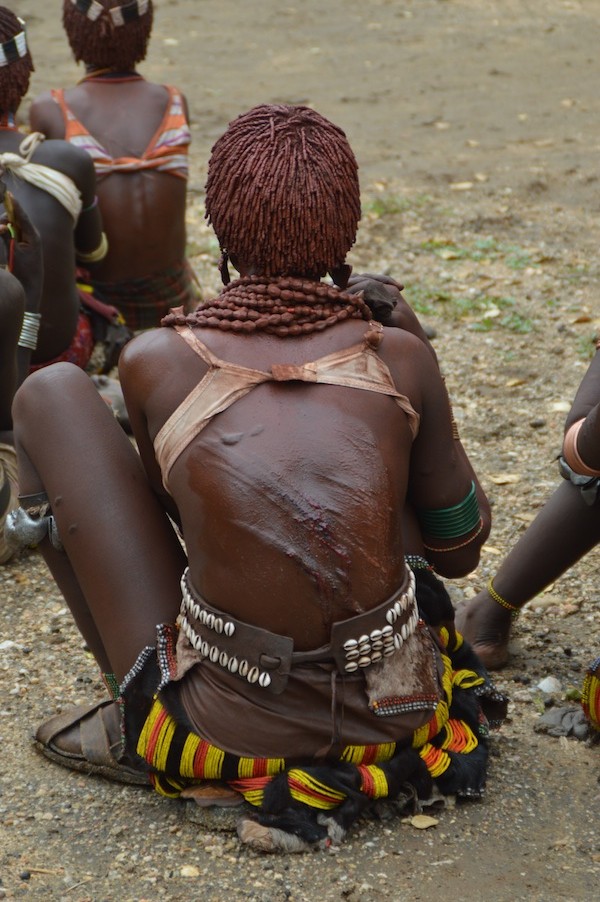 Addis Ababa and Bull Jumping
This aspect of the bull jumping is strongly opposed by Ethiopia that would like to abolish this moment but to only maintain the successive part, or rather the jumping of the bulls.

In fact, the Hamar tribe responded to Addis that the day they stop venerating their GODS giving up the celebrations and so to their own cultural traditions then they might think it over.
An answer that means NO, we do not want to abolish this part of the tradition because it would mean for us to give up an important part of our society, traditions that from the outside are not easy to understand.

It’s true, it is not nice for us to see women being flogged, but it is also true that it is the women who, shouting and showing the body pushing towards the men, grasping their arms vigorously and persistently, even when he, tired of all this refuses, finds himself forced to do so.

The more scars you have (remember that the scar has a value in tribal communities), the more you have shown to love the future jumper (remember that they are all women of the family, except the mother who, in the meantime prepares food for the celebration) .
It is, therefore essential to approach this event knowing that there will be blood and not judge these gestures in which are concerned symbols and deep-rooted traditions important to the community.
I asked my Hamar friends first if really the women are happy to be hurt and the answer is univocal : YES. This is their way of living family and community relationships, the case to say a kind of “blood pact”.

Suspending my own judgment on these events, the celebration continues.

The day of the bull jumping was very rainy and although crossing a river, with many difficulties and a lot of fear in view of the strong currents, we managed to arrive for the first phase (the whippings).

Seeing that the river was filling up more and more, which did not allow the boy who had to jump the bull to pass to the other shore, we went away to get to the destination when it was already dark and all wet without being able to watch the jump.

This happened at night, when he managed to cross the river, so the picture above is not mine because I, unfortunately, had to go away to try to return to the village, not without problems and a lot of fear.

In these pictures the way to the place where the bull jumping should have taken place. Hard to reach, the return was even worse and scary.
The water was almost up to the armpits and they transported us one by one accompanied by six men for the very strong currents that caused us not to be able to stay on our feet and dragged us away. Wet, dirty and tired we arrived at the hotel about 6 hours later! 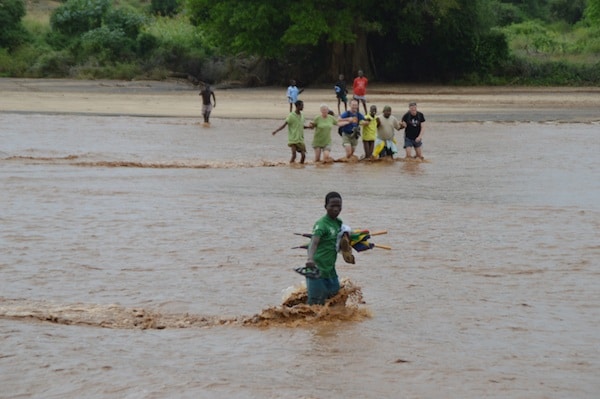 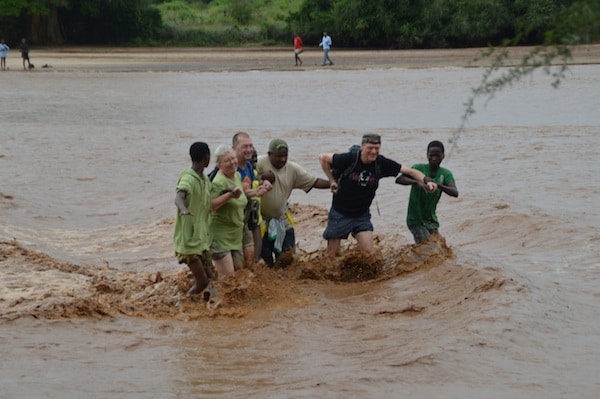 In the meantime that the family women allowed themselves to be flogged, the mother of the jumper organized instead the feast that that night would happen in the village, with the participation by all those bystanders who do not want to miss the incredible, tireless and sensual dance of the night : the Evangadi.

The group of men in a semicircle sing striking up a music where there are no instruments, but only voices.
The women in the group are in front, next to the largest of the village tree under which the celebrations start.
The first moment is all male, they sing, jump, dance, as the women slowly arrive to form the group, the sensual and somewhat promiscuous dance of the night begins.
A chase between him and her, in which she escapes from his invitation and ends with a great final jump of the man protruding his pelvis towards the woman.

The meat in the meantime is left to roast, the technique reminds me of that in Argentina. A slow cooking due to the fact that the animal is not put on the fire but at the sides.

The old drink and chat in the shade of the open hut that serves as a gazebo.
I danced with them, I jumped and I was not fast enough to run away from his jump him at the final part.
It is dark and we have to go. I do not have a car and the walk will take at least 1 hour and a half.

On the road lit only by the moon and with the Ethiopian music that Kala is playing, we meet many men who ask information to arrive at the party.
Apparently they will celebrate throughout the night. 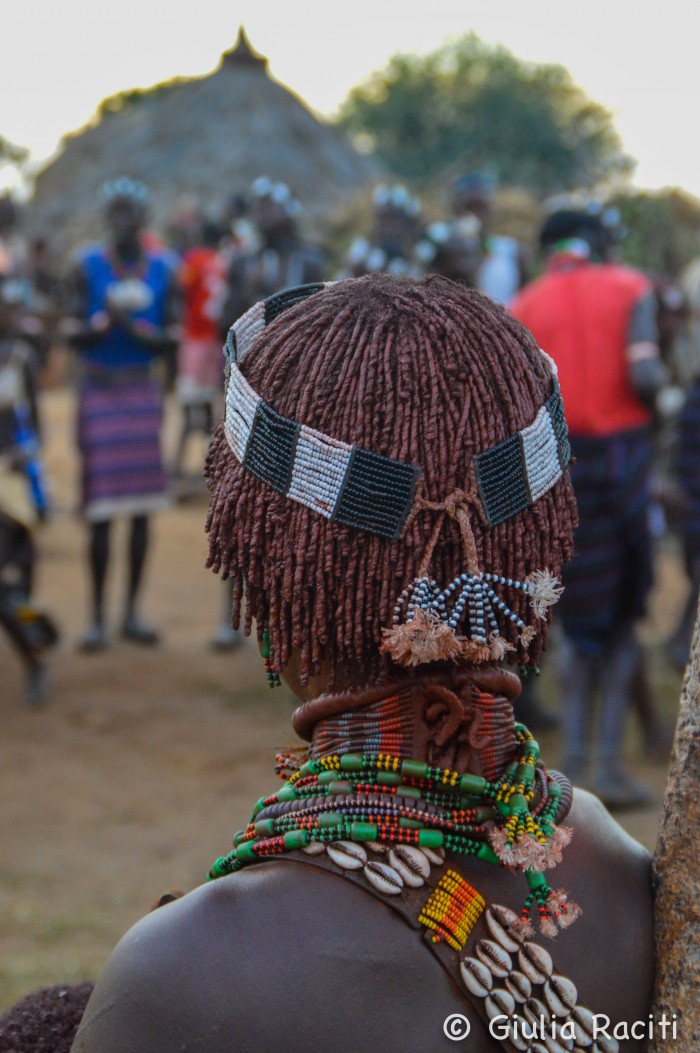 Interesting reading about the world of the Omo Valley

Argentina's Patagonia - Till the end of the world 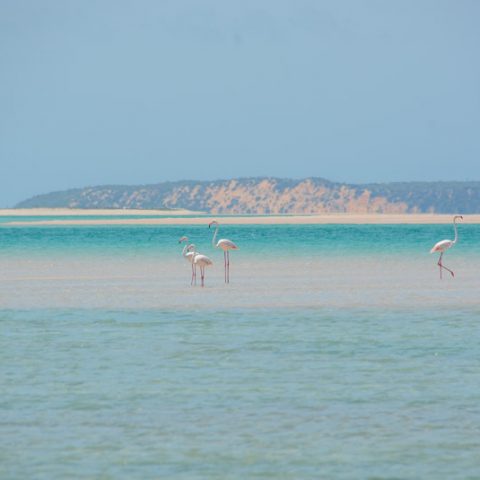 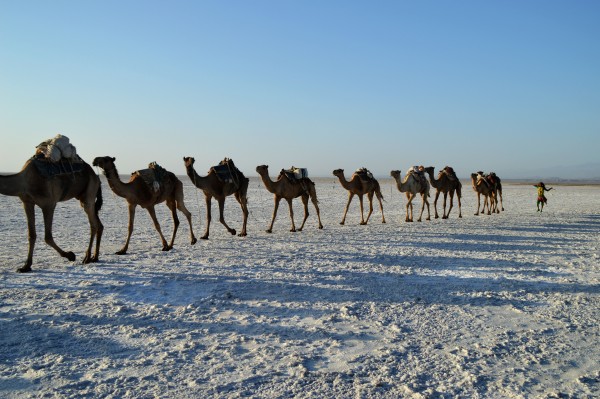 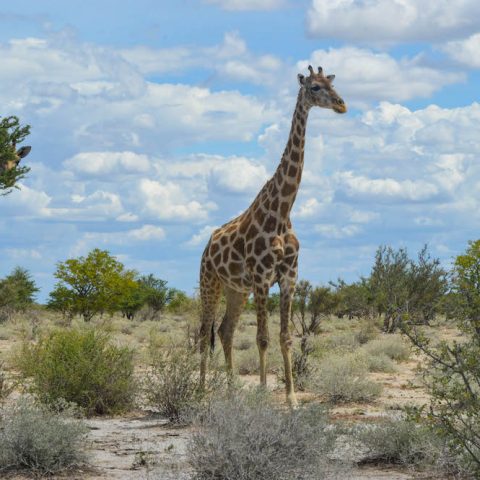 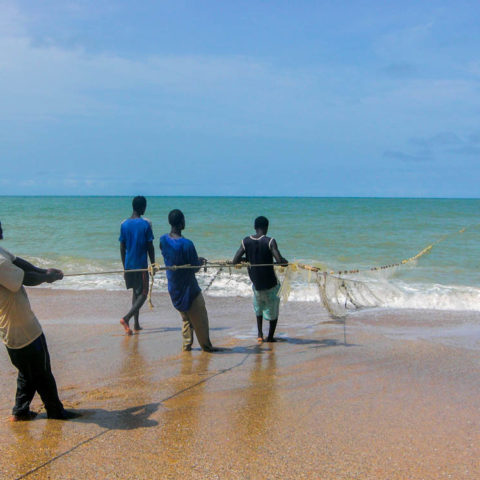 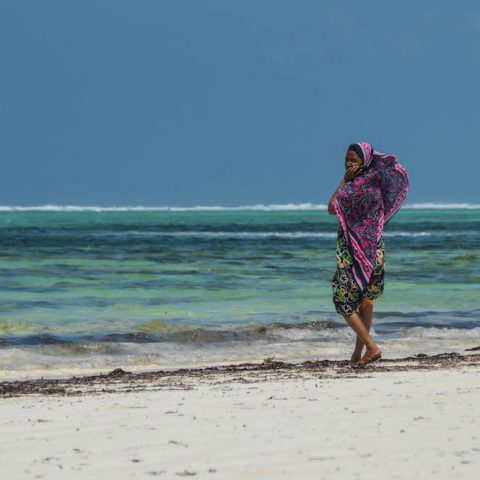 
Comment On Omo Valley – The Hamar tribe, the Bull Jumping and the Evangadi

The traditions in Africa are worth witnessing! They are indeed rich in rituals as mentioned and it’s amazing that it is still existing as of today. Many traditions are being forgotten as time goes by but these ones are really treasured.