Backpacking in Mongolia – The Gobi desert 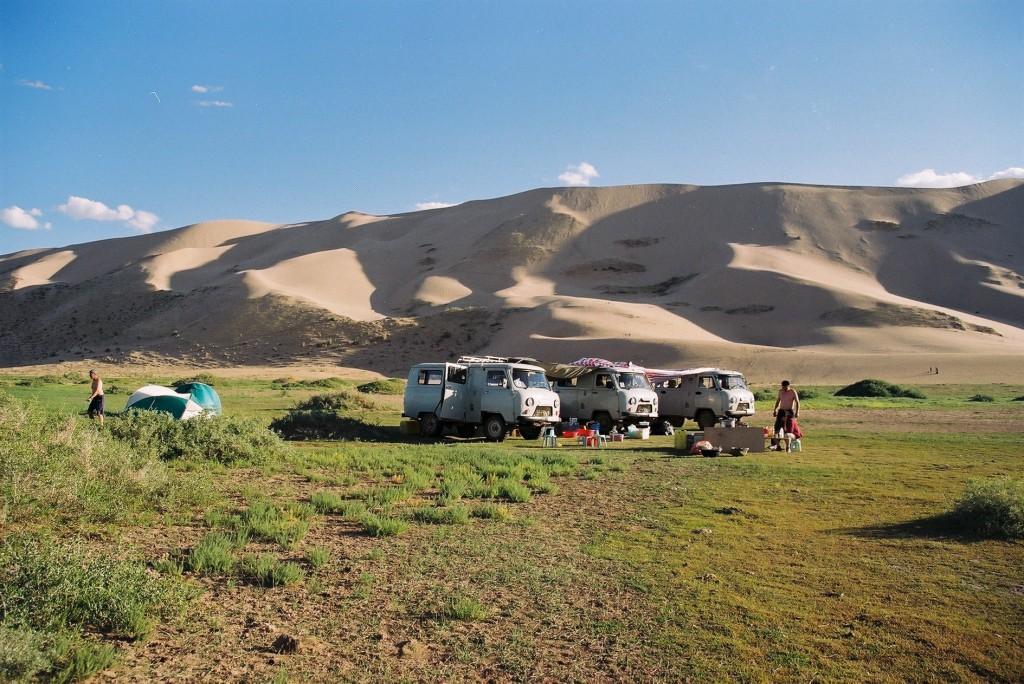 A trip to Mongolia by definition includes a trip in the Gobi desert, one of the largest and most desolate places on the face of the earth but at the same time is one of the most fascinating and mysterious.
This vast semidesert occupies part of northern China and southern Mongolia. It is bordered to the north by the Altay Mountains and the grasslands and the steppes of Mongolia, south-west with the Hall of Hexie (Historical route that runs through the Chinese province of Gansu) and the plateau of Tibet and to the south-east by the Northern Chinese plains. The annual temperature range, ranges from -45 °/ -50° C in the winter to +40 °/ +45° C in the summer.

The arid continental climate is characterized by the approximately 200 mm of rainfall per year. These occupy about 1/3 of the area of Mongolia and dominate the area for hundreds of kilometers. Marco Polo called this desert, the desert of Lop (near the town of Lop, known as Charklik today, near Lake Lop Nur, which has no fixed site but occupies a space that varies according to the regime of the rivers that it feeds from) or Great Desert, noting in his diary that it took him a year to cross it. The food and water were very scarce and he almost got lost due to hallucinations and deceptive evil spirits.

The Gobi certainly not only evokes a desolate landscape and poor life, but inside it there are also landscapes of overwhelming beauty and absolute charm: salt lakes, sandy expanses and canyons of red rocks that at sunset seem to be on fire (Flaming Cliffs) to the reflections of the last rays of sunlight. 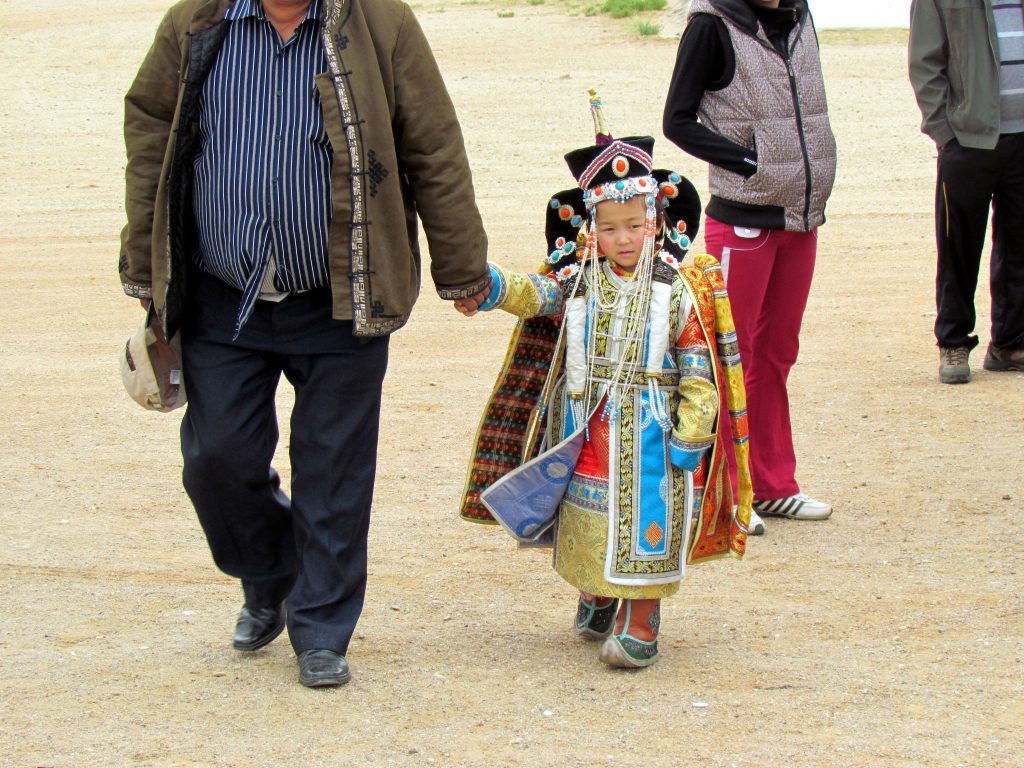 The History of the Gobi

Legend has it that the Gobi has been created by the passage of the massive armies of Genghis Khan, but in reality the many fossils that constitute it, testify that its territory, rich in water and vegetation, was once an ideal habitat for the dinosaurs. In the ’20s, in this territory feared by the same Mongols, the American adventurer Roy Chapman Andrews, with his team, unearthed skeletal remains of over 100 prehistoric specimens.

The inhabitants of the Gobi

Today, the Gobi is inhabited by a few tribes of nomadic shepherds. I believe finding people so simple and approachable in the twenty-first century is now really difficult.

The Mongolian people is famous for its hospitality and I have to tell you that in the Gobi, time seems to have stopped at the time of Genghis Khan. The inhabitants of Ulaanbaatar will gradually forget their traditions and what has always distinguished them to look towards the Western culture with curiosity and interest. 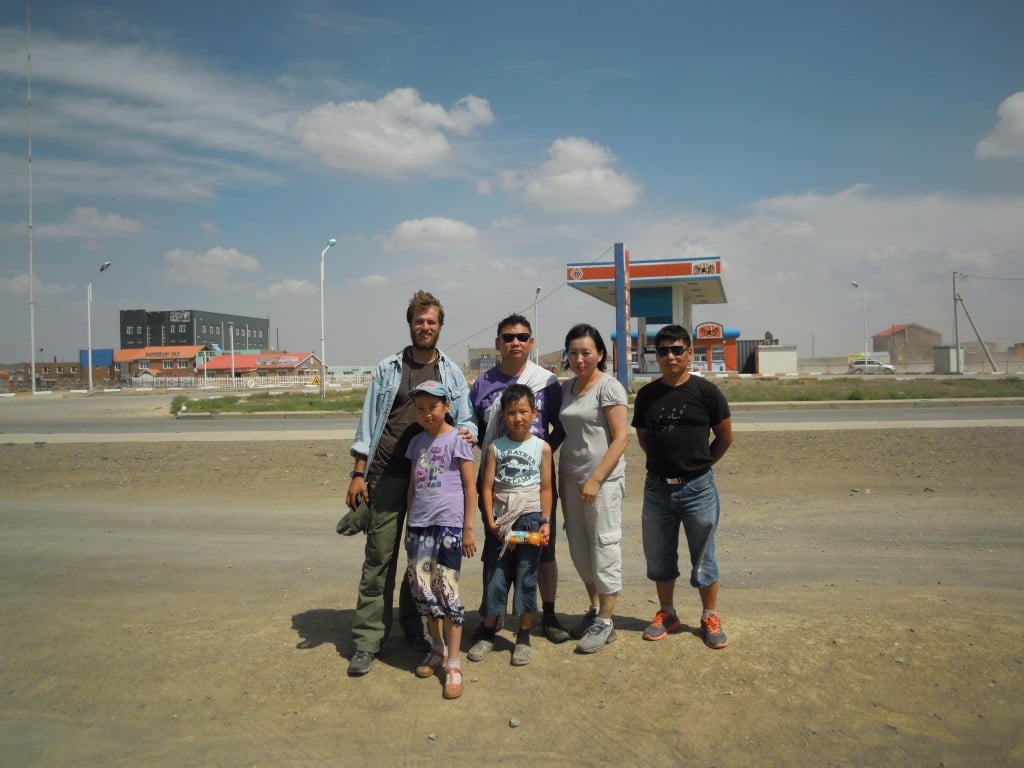 There are also some rare fauna, which are now in danger of extinction like the Asiatic wild ass (Khulan), the Prewalski horse (Takhi), the Gobi argali, the wild camel (khavtgai) and the Gobi bear, reason why it was declared by UNESCO. According to some data provided by environmentalists, in Mongolia, there are about 28 species of mammals in danger of extinction.

The vegetation is formed by a few species of thorny shrubs and the fauna, instead, includes a few species of rodents and of snakes, among which the yellow viper. Desertification is the consequence of the rain shadow cast on the region by the Himalayas, which, in fact, prevents the clouds bearing rain to reach it. 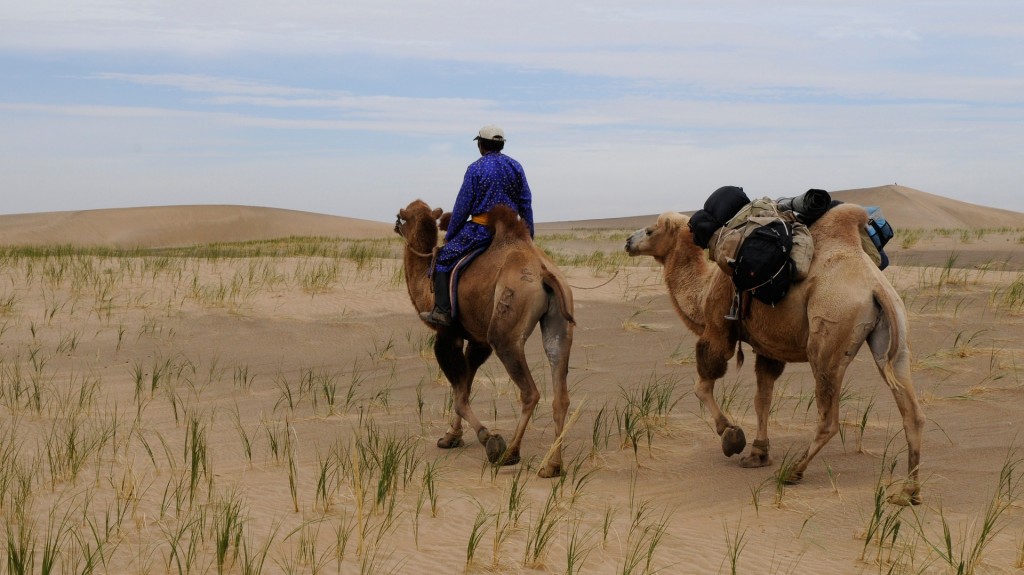 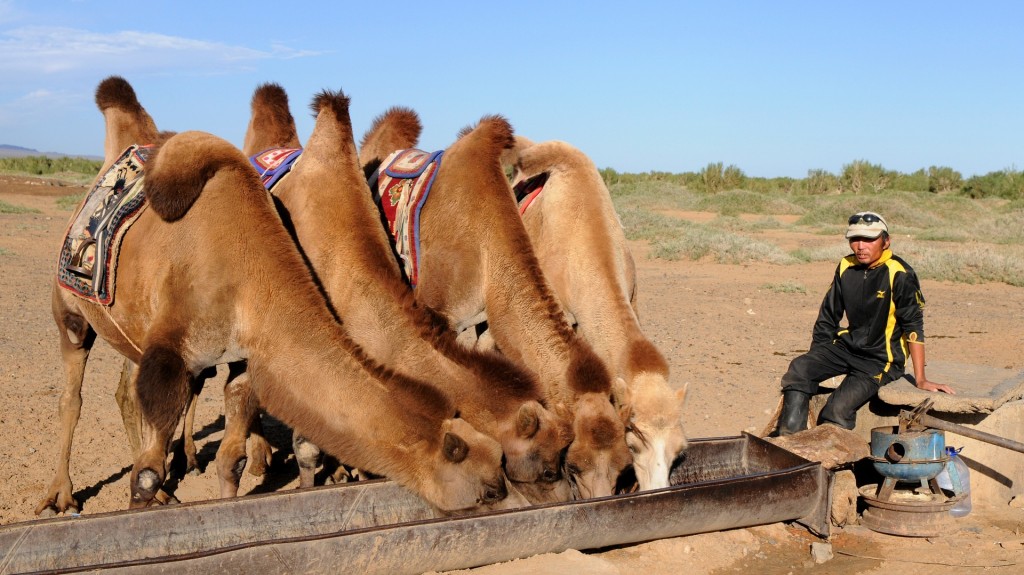 How to get there and how to get around

There are many means of transport, both public (daily buses) and private (minivan or Jeep), operating between Ulaanbaatar and the various provinces (Aimag) of Gobi. The choice is up to you; you have to know that with the train you can stop at Biger, Sainshand and Zamyn-Udd. And from there proceed with either a public or private means of transport. Dalanzadgad, Altay and Bayankhongor have an airport from where it is possible to take domestic flights to Ulaanbaatar.

My advice if you like adventure and if you want to save some money, is to travel by bus, where the Mongolian sympathy and curiosity will overwhelm you. Inevitable will be the stops in the guanz (Cafeteria) to drink airag ( fermented mare’s milk) and to eat kuushuur (mutton fritters). 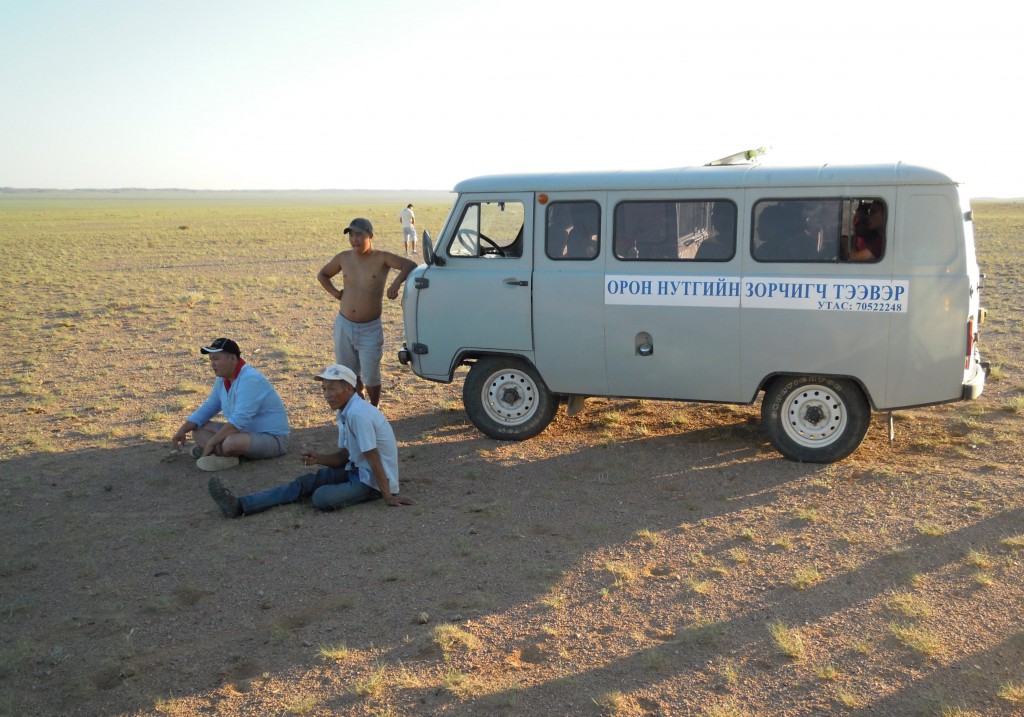 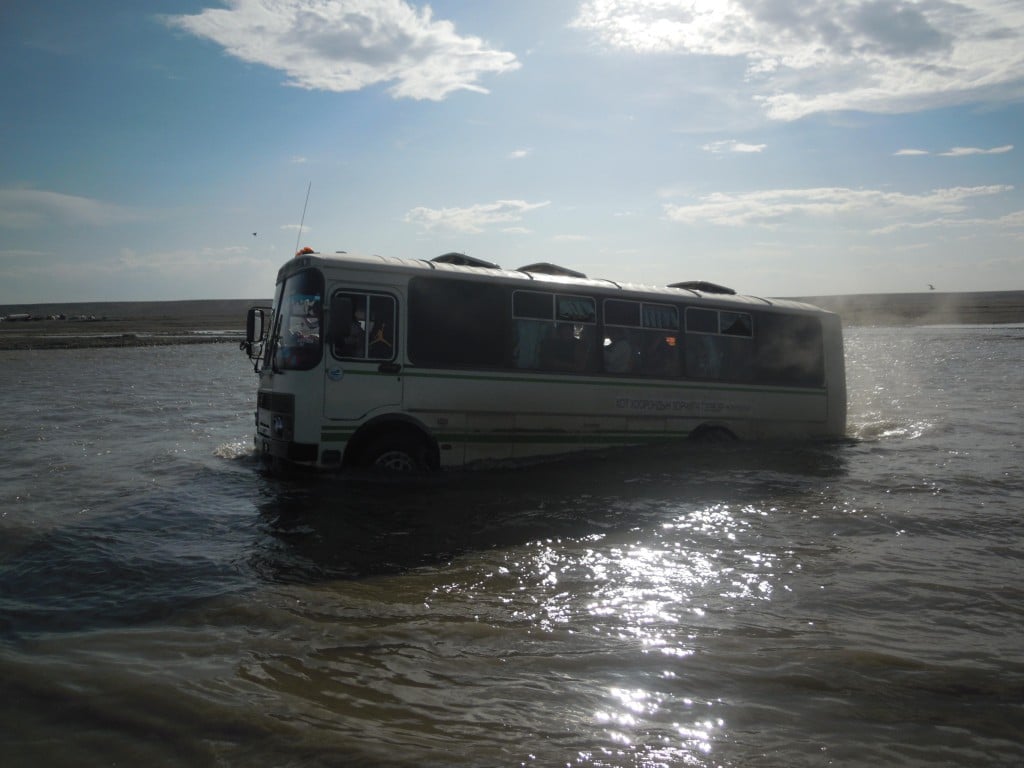 What to visit in the Gobi

The main attraction of the Gobi is the Gurvan Saikhan National Park, where sand dunes, ice canyons and splendid mountain landscapes make it so that this is the most selected attraction by tourists who visit the Gobi.

Entrance to the park costs 3,000 T (approximately $1.5) and specifically the attractions that are most striking are the valley of Yolyn Am, famous for its rocky cliffs and its narrow canyons and the sand dunes of Khongoryn Els (the largest sand dunes of the whole of Mongolia with a maximum width of 12 km and an extension of about 100 km). 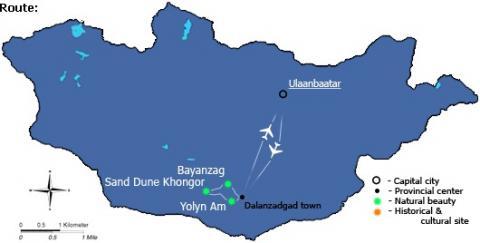 Another important attraction of the Gobi is Bayanzag .

Place commonly known as the Flaming cliffs, name given to it by paleontologist Roy Chapman Andrews, who from 1922 onwards brought to light a large number of bones and dinosaur eggs on display today in many museums of the world and who have made this area famous. If the spirit of adventure is not missing in you, you will find enthusiasting this desert in the Bayangovi area. The travelers that go this far should avoid leaving without abundant supplies of water, food, fuel and spare parts for their vehicles.

The reason for all this is because the area around KhermenTsav is particularly arid and poor in water resources, making of it an area almost uninhabited.
Certainly venturing into these areas with two vehicles and a local guide is highly recommended. Among the areas to explore in the aimag of Bayankhongor, moving from north to south, are : 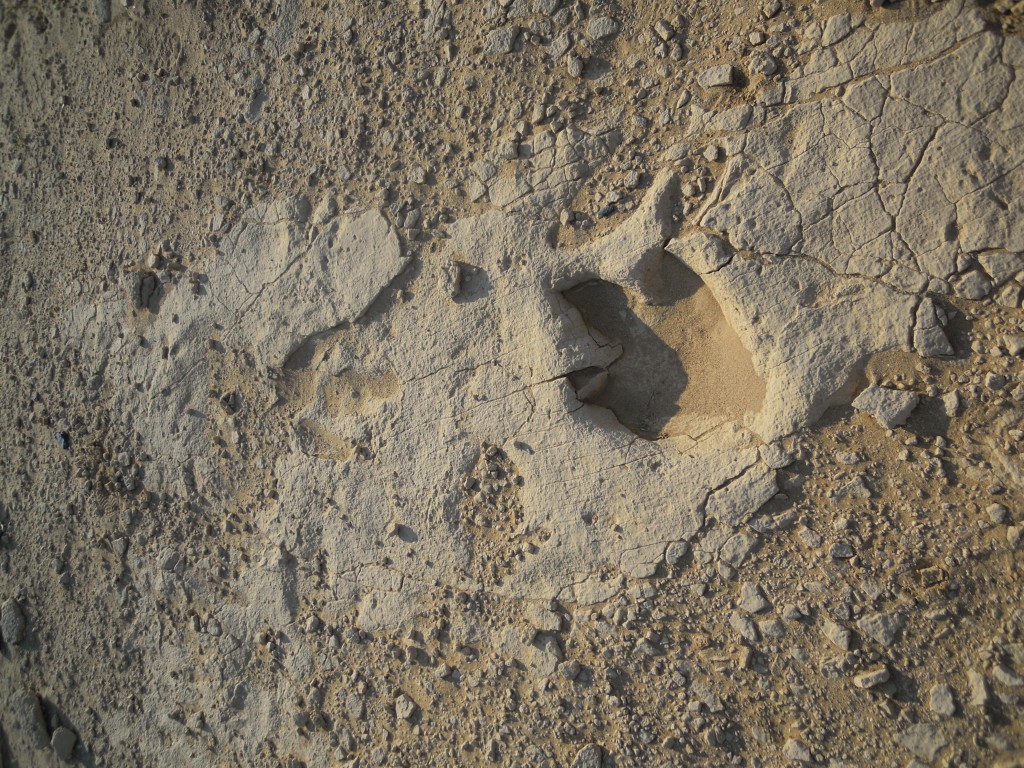 From my point of view to fully experience the Gobi you will need a tent if you want to travel in a completely independent manner, and to spend very little.
It’s also true that for the more demanding tourists there is the possibility of sleeping in Gher camps.

In larger villages you will always find a hotel or a motel at more than reasonable prices (5/$1), but if you step really in tune with the people the doors of a Mongolian Gher for you will always be open .

This will allow you to get in touch with the real Mongolia, obviously, a family that invites you to sleep inside their very Gher definitely expects something as a gift. Money is always welcome but specific gifts for each family member such as cigarettes, sweets and vodka are more usual and always welcome. 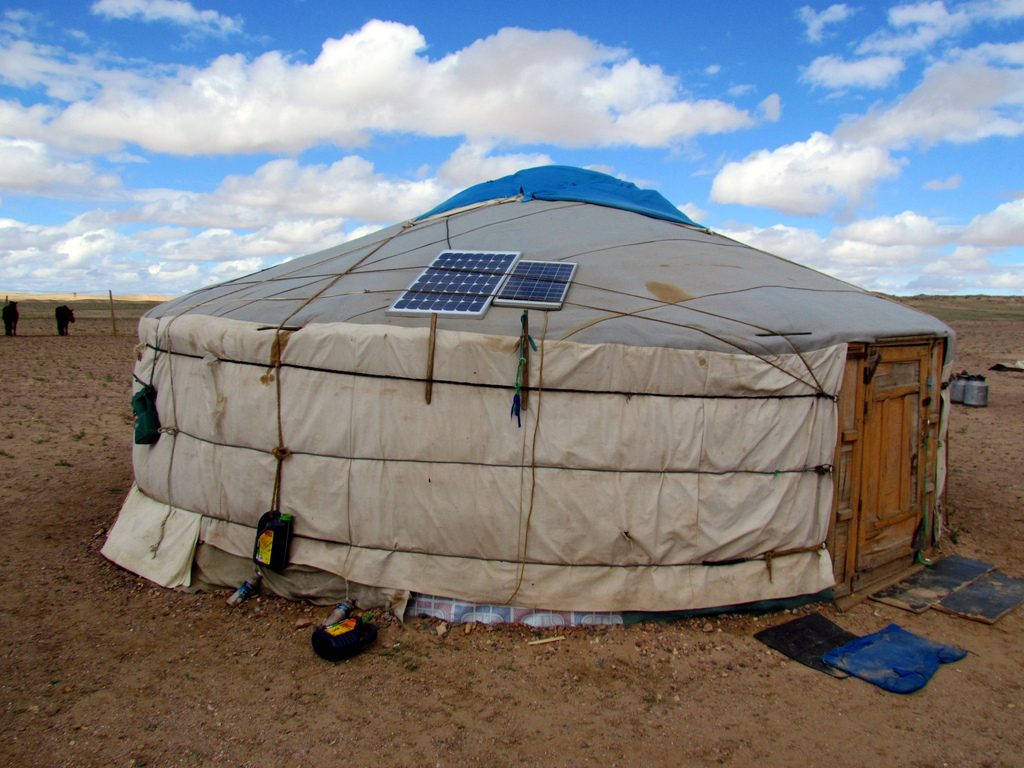 With the advent of the twenty-first century we are increasingly seeking to produce renewable energy and Mongolia is one of these countries that is slowly adapting to this kind of life.

The first wind farm was inaugurated in 2013 at Salkhit (75 Km southwest of Ulaanbaatar). The plant with the production of 50 megawatts will save 122000 tons of coal and 1.6 million tons of water, thus reducing the emission of carbon monoxide. The wind farm provides about 5% of the national energy.
The goal of the Mongolian government is to arrive to cover up to 20/25 % of renewable energy by 2020.

The Gobi in the renewable energy context is greatly taken in consideration. According to experts in the Gobi, the wind has the capacity to generate 300,000 megawatts while the sun, 11 gigawatts, figures that could one day lead Mongolia to export clean energy to other neighbouring nations. 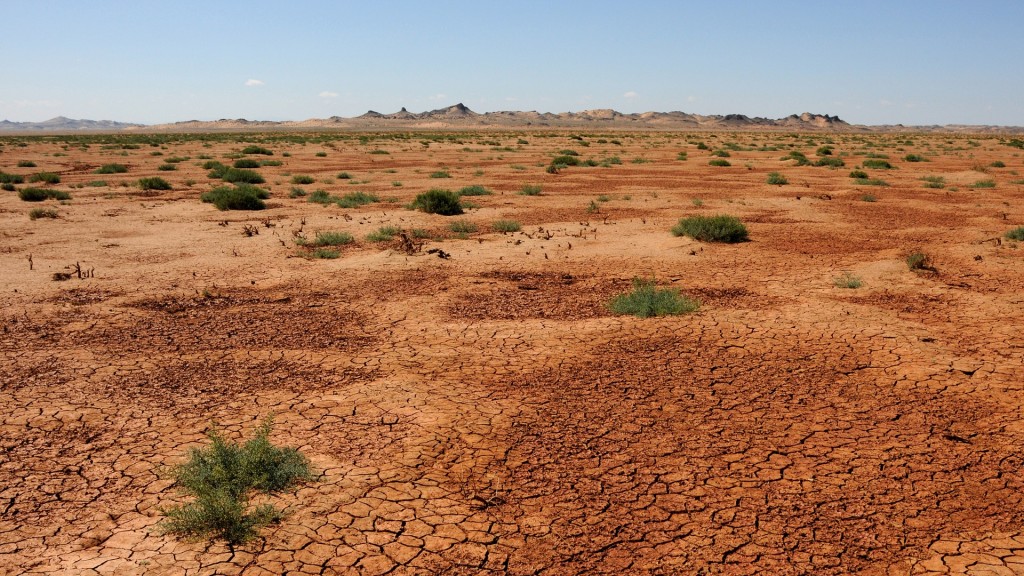 Eco-Tourism in the Gobi with Gobi Oasis

In an effort to stem desertification caused by the advancing of the sands, Byamba Tseyen, forestry engineer already retired for the past 40 years, is putting ahead the Gobi Oasis project.

This is a small tree nursery built in his hometown Mandagov, in order to cultivate trees and then re- implanting them into areas of the Gobi that desperately need help to combat desertification.
Hence the plant, specifically, offsets the CO2 emissions, reduce greenhouse gases, provides natural habitats, reduces the dust and the wind, protect the native trees of Gobi and reduce desertification.

Obviously the nursery is flanked by a ger camp, that for years has attracted the attention of environmentally sustained tourism, where for the modest sum of GBP 50 you can enjoy full board and a tree for you to be planted in the first person.

Some photos by – David Berkowitz

Best of Aegadian Islands - The ultimate guide to the islands


2 Comments On Backpacking in Mongolia – The Gobi desert